Get to know Remote Year Kanyini, from day one in Kuala Lumpur to their advice as they transition into their second month. 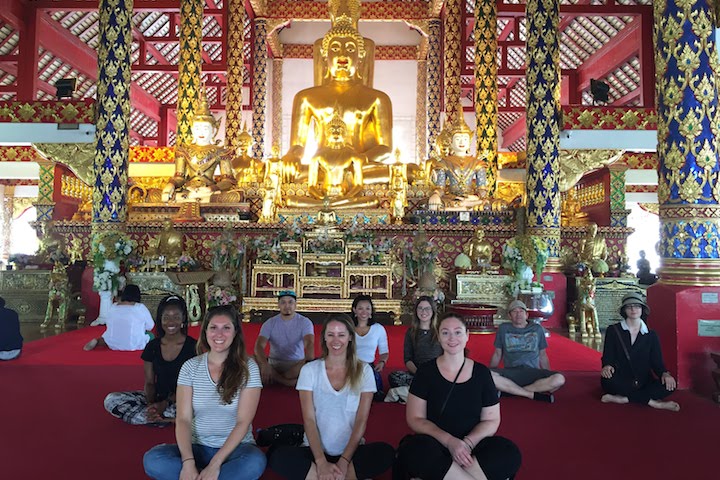 There’s nothing quite like your first day on Remote Year. You’ve spent the past few months getting to know your fellow travelers online, tuning in for webinars about what to pack, re-explaining the concept to your family and friends for what seems like the hundredth time, and now here you are. Locking the door to your apartment for the last time. Watching intently as the airplane’s wheels lift off the tarmac, ushering in your new normal and marking the start of your adventure.

Life will never be the same.

For Program Leaders, day one is just as exciting and nerve-wracking as it is for Remotes. Like anxious parents preparing for the first day of school, Maria and Michelle have organized everything down to a tee so that the day goes by smoothly. After months of preparation, they are at the airport, ready to receive each Remote personally as their flights land throughout the day. They stand in the arrivals lobby holding a flag that represents Remote Year Kanyini, hoping that the new Remotes will feel an immediate connection to that moniker, a feeling of power and belonging, family and purpose. And now, with time to spare before the first plane lands, they wait.

Before the feet of Kanyini Remotes touched the soil of Kuala Lumpur for the first time, Michelle and Maria had spent a lot of time getting to know them. They had been messaging in group Slack channels for months, answering questions and learning what makes each person tick as they prepared for the journey ahead of them.

They soon found out that, like each Remote Year program, Kanyini has its own unique personality. Among Kanyini Remotes, 45% are full-time employees at their company, 35% are freelancers and 20% are entrepreneurs, while 8 different nationalities are represented within the program. With Remotes ages 24-47, there is definitely a variety of generations represented.

“They’ve started to plan diving and jungle retreat side trips - some of them have even already booked their flights, “ Maria said. “One of the goals of a member of the program is to host at least two family dinners and to take a cooking class in every country we visit. They’ve also been doing a lot of food research so it seems to me we have a foodie program!”

That instant connection pays homage to their program name, Kanyini. It’s an Australian Indigenous word that describes the principle of connectedness. In English, it’s best defined as a combination between the words “responsibility” and “love”.

“My goal is to get everyone to feel super involved in the community,” Michelle said. I also want them to become better professionals, so that they take whatever they learn on Remote Year and apply it to their career, which will pave the way for the future of work.”

“I want to see Kanyinis become even more conscious, independent and fearless - confident that they can live out their dreams. I want to see them smash their goals and in doing so inspire others to live life differently.”

On 28 January 2018, Kanyini Remotes arrived in Kuala Lumpur for their first month of Remote Year. After a long plane ride filled with anticipation, hesitation and generally wondering “what did I just get myself into?!”, they were greeted by Maria and Michelle, any ambivalence that they felt disappearing into a tangle of open arms and a flurry of questions.

What did you decide to bring with you?

“I packed pretty light with clothes, I think, which was difficult,” said one Remote. “Six months’ worth of contact lenses. My hiking boots - I can’t leave home without those. On the basis I might find friends that play the saxophone, I brought all my saxophone pieces because I am going to miss it loads.”

“Clothes and snacks. That’s literally it,” Nikhil said. We don’t know if you just wanted to keep it simple, or if those are your only necessities, but good luck to you, Nikhil!

What are you most excited to experience over the next year?

“I think I am most excited to find out what makes everybody tick, all the people we’re traveling with, what makes them happy...while seeing some awesome places and finding out about different cultures,” a Remote said.

“At first I would have said [I was excited to] see different places, explore new ways of working, but now I would say there is something to be said about making friends that last longer than the year,” said another.

This is the start of a beautiful year.

One month later, as Kanyini prepares to move on to their second city on Remote Year, Chiang Mai, we asked a few Remotes to sum up what the past month has meant to them. They’ve made the most of their time in Kuala Lumpur and have begun to settle into the rhythm of a completely remote lifestyle. That feeling of worry that we mentioned earlier? It’s been replaced with confidence and an addiction to new experiences. Ryan Whitley, a programmer on Remote Year Kanyini, kicks us off:

As I’m writing this my first month in Kuala Lumpur a part of RY Kanyini is coming to a close. It’s been a whirlwind of a month with getting to know my new family for this next year, exploring a completely new city on a completely new continent, not having a heat stroke, planning side trips, and keeping up with the many events that RY plans. Oh, and also maintaining that job mine, that’s so helpfully keeping me on RY. There’s so much going on during RY, and it’s so tempting to do every single thing and then some. But just chill fam, and don’t burn yourself out so early. It’s going to be a long and exciting year, full of things very few people ever experience. Cheers!

Erin An, an entrepreneur on Remote Year Kanyini, provides a bit of perspective:

‍My perspective changed for good after visiting a refugee family this week. The mother of the household, who cooked the most amazing feast for us, explained that the reason why she had to flee her country was because the Taliban burned her home and the school that she built, for going against their rules. The fact that she had everything taken away for trying to contribute to the education of young women was heartbreaking. After that story, I immediately witnessed my problems shrink.

This change in how I view myself in relation to what else is happening in the world is incomparable to any formal education I’ve had in a classroom. If anyone is hesitating about whether Remote Year would be worth it or not in terms of the costs, I would say it’s worth more than anything you can buy.

Finally, Rich Rama, a producer, restaurateur and philanthropist on Remote Year Kanyini, offers his insight and advice for Remotes entering Month One:

A lot of focus on your arrival to the first day of an extremely different life is what to pack for a year of traveling with a bunch of strangers, but to me, the focus should be more about what you’re packing mentally.

There isn’t much you can do to prepare for Remote Year except just jumping in with both feet...that is one common thread amongst everybody. Your new family is just as crazy as you are to embark on this year long adventure without trying it on first.

However, I have three tips for future Remotes after my first month. The first is to start thinking about what your purpose and goals are for the upcoming year. Now, this may change, but coming into this with some sort of idea will help create a mindset for why you plan on participating in Remote Year and act as your first guide into what ultimately becomes your new normal.

My last tip is to be genuine.  The first month almost feels like your first month of university. Everybody is flying over uncharted territory trying to find their way. If you are your genuine self, it will show and you won’t have to try so hard to make new friends. Being your genuine self will act as a magnet to others who are also genuine. You are traveling with this new crew for a year. You have a full year to get to know your family. Take your time. There is no reason to try so hard to make an immediate impression. Definitely play the long game.

We couldn’t have said it better ourselves, Rich.