How to Build a Business on Remote Year: The Josh Boone Story

Josh Boone joined Remote Year Magellan after leaving behind a life of 9-5. While on the program, he launched a business and collaborated with other Remotes to launch another after becoming a Citizen. This is his story. 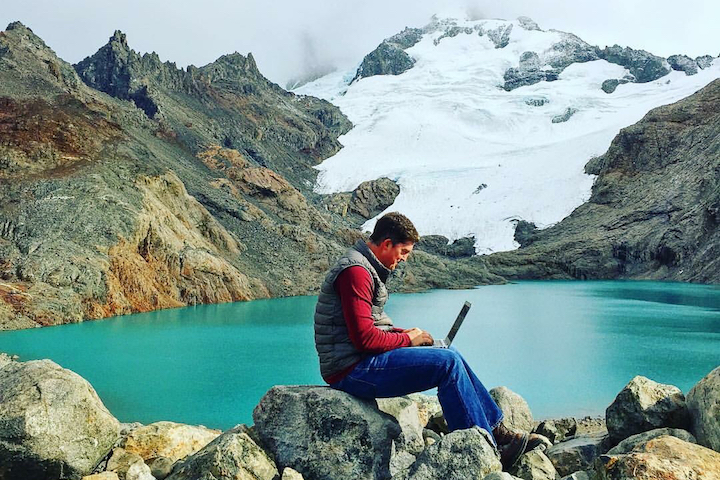 The path to Remote Year is different for everyone. Some find out about this work and travel experience and can’t say “yes” fast enough. They’re drawn in by the possibility of a life that is not tethered to a strict schedule or location and the opportunity to experience what it’s like to live like a local in diverse cities around the world. Others require a bit more time and research before taking the leap, creating spreadsheets for budgeting and checklists that include every piece that needs to fall into place before they pack their bags.

About two years ago, Josh and Meghan Boone lay at each end of this spectrum.

“She was ready to do it immediately,” Josh said. “She was like we’ll just quit our jobs and figure it out and I didn’t think I could do that. I had to do a few months of  practical number crunching, like what happens if this, what happens if that... I didn’t want to be in Month 5 and be out of money.”

Josh was the Director of Operations for a medium-sized company in Washington D.C. when he and Meghan began contemplating Remote Year. Although he was working directly with the CEO and liked his position, together they were searching for a change.

While he was weighing his options, Josh kept up with the Remote Nation, following the newsletter and becoming more interested in the community connection that Remote Year could provide. He knew that he wouldn’t be able to make his current position remote and was considering starting his own business if they decided to take their lives on the road.

To Josh, the Remote Year community seemed like it could be the perfect testing ground for his startup.

How to Build a Business on Remote Year

Fresh off the wave of excitement and nervousness that comes with starting a new adventure, Josh and Meghan landed in Valencia, Spain as members of the Remote Year Magellan community, determined to accomplish their personal goals.

Hers: see more of the world and connect with its people. His: build connections within the Remote Year community and launch a successful online training business.

“I was a coach on the side [in Washington D.C.], a few hours a week,” Josh said. “CrossFit at the time, but I had also coached swimming, sports and conditioning, strength, powerlifting. So I thought I’d do the online trainer thing.  I’d learn a lot more about that, try and incorporate nutrition - work that just had more to do with my interests anyway.”

True to his personality, Josh’s first month on Remote Year was one of intense research and business development through trial and error.

It was also a month in which he began to build the connections with his fellow Remotes that would light the way forward for his entrepreneurial venture.

“Some of my first clients were Magellan Remotes,” Josh said. “They helped me build [my business] because what they struggled with is what I started to tweak.”

“With a lot of Remotes, I had to find a way to remove the need for space and equipment because that was never guaranteed, but I didn’t want to do just body weight stuff, so I started using power bands,” Josh said. “They’re really light and they can get really good resistance. Plus, if you roll them up they’re less than 2 meters in size and 2 kilograms in weight so they’re great for people who are moving around a lot. [With this routine] you can remove the idea of a gym, you can do the Instagram-worthy park workouts all that good stuff.”

Josh’s newly-remote lifestyle had inspired him to create a fitness regimen for people who were similarly not tied to any one location, giving him a unique position in the marketplace. Because he was able to understand the challenges of travelling, working and staying in shape firsthand, he had the ability to build a program that differentiated itself from others out there and test it within the Remote Year Magellan community.

“I have a bunch of flashes in my head of having 4-5 of my [Magellan] athletes in a park in Lima working out at 6:30 in the morning,” Josh said. “In Cordoba we did a nutrition challenge, [which was] my first step into overseeing other people with an organized nutrition plan. We did a 30-day macro balance challenge, and my team lost by three points so I had to do 100 burpees. Those were some pretty cool memories business-wise.”

Beyond the athletes testing his Nomadic Physical Wellness system, Josh was spurred on by the support of other burgeoning entrepreneurs on Remote Year Magellan. To ensure that they were making progress on their ideas, they developed a mastermind group that would meet consistently throughout the year.

“We met and we were all brand new, there were very few of us who were already successful entrepreneurs,” Josh said. “We were all new, we had very different backgrounds and skill sets. We came together and helped each other. Sometimes it was just talking through where you were and keeping you motivated and accountable.”

Josh still meets periodically with the members of the original mastermind to talk through new ideas and learn from each others’ business experiences after Remote Year. Even after a year of work and travel, Remote Year communities like Magellan maintain close relationships and are committed to helping each other achieve ambitious goals.

Months passed on Remote Year and Josh began to add clients to his roster, including many more Remotes. He continued to attend the local gyms in each location and test new ways in which he could use power bands to replace traditional exercises for his athletes. Occasionally, he’d attend a CrossFit class for old time’s sake. That’s how he met Nassir, a coach at the local gym in Rabat.

“I was helping him in CrossFit, but the funny thing was he didn’t speak a lick of English! It was Arabic and French and I don’t speak either of those languages, but we became friends and I was helping him through all hand motions and gestures,” Josh said.

It’s experiences like these that bring Remote Year to life. The local relationships that develop each month in cities around the world bring us all a bit closer to global empathy and understanding.

After all, to walk a mile in someone’s shoes, you need to start with just one step.

How Life Has Changed

Life post-Remote Year is a little different for Josh and Meghan. They’ve landed in Columbus, Ohio and are working on starting their own coworking space called Cova Cowork with two fellow Magellan Remotes (Minji Kim and Dylan Hoffman).

Since Josh doesn’t report to a 9-5 anymore, his relationship with Meghan has changed as well - for the better.

“Prior to Remote Year, we’d get up, I’d drop her off at the metro and I wouldn’t see her for another 12 hours,” Josh said. “I would work and then I would go coach and then I’d come home at 9pm. She would be tired, so she would stay up until 10pm to talk with me while I ate dinner and then she’d go to bed and I’d stay up for another hour. We didn’t see each other except on the weekend.”

“One day on Remote Year, we were sitting across from each other in Portugal and I was like ‘You’re always around’. Joking, because we hadn’t been able to spend that much time together before this experience.”

Twelve months of travel and two businesses later, Josh can truly say that he feels his perspective on life was changed because of Remote Year.

“It used to be that before each [Remote Year] city I’d study all of the welcome slideshows and know where we were and I’d get out my map and be starring stuff. By month six I was like ‘eh what time are we leaving tomorrow’? I became a little bit more relaxed in that sense, which Meghan likes because travel is a little easier,” Josh said.

Remote Year gave Josh the opportunity to spread his wings as an entrepreneur while encouraging him to lead a more balanced lifestyle and avoid burnout. He was able to take in the full effect of his inspiring surroundings and create a successful business model based off of the remote working lifestyle, while building strong connections with locals in each city that he travelled to. Those twelve months on the road became an incubator for his entrepreneurial mindset and changed the trajectory of his life.

“Our outset on how we want to pursue life as a whole is having that work life balance. Seeing life as a matter of experiences and not things. That’s a different outlook, especially for me. Meghan was already there to begin with so I came more to her side than she did to mine - but that’s a good thing.”